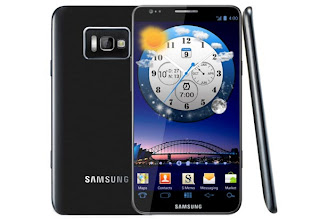 
Samsung Galaxy S3 was the most anticipated phone for the year 2012.It is the sequel to the extremely successful Samsung Galaxy S2. Samsung Galaxy S3 is a bar shaped smartphone with a massive 4.8'HD Super AMOLED touchscreen and a 1.4 GHz quad core processor. The phone should be launched in first week of June and may be priced at Rs 38,000.

Design and Specification Samsung Galaxy S3 is the most anticipated phone for the year 2012. It is the sequel to the extremely successful Samsung Galaxy S2. The ultra slim phone has a bar shaped form factor with a giant 4.8" HD Super AMOLED capacitive touchscreen. The phone runs on Android 4.0 Ice Cream Sandwich OS and is powered by a 1.4 GHz Quad core processor with a massive 1GB RAM. The phone is fairly large with dimensions of 136.6 x 70.6 x 8.6 mm making it razor thin and super impressive in looks. The phone weighs a hefty 133grams. The phone features the all new Smart Stay feature which detects whether the user is still looking at the phone to keep the screen awake. The phone also has features such as S-Voice which can understand voice commands and do actions such as increase volume, search etc. The Direct call feature lets you call the contact you are messaging with by just bringing the phone close to your face.
Camera and Multimedia
The phone has an 8MP camera with auto-focus and LED flash. The camera has a chockablock of Geo-tagging, touch focus, face and smile detection and image stabilization for high quality pictures. The phone comes with special Burst Shot feature that lets you capture 20 images at once and the phone then automatically selects the best photo using the Best Shot feature. The camera can record HD video at 1080p resolution at 30fps. The phone also sports a 1.9MP secondary front-facing camera that provides flawless image for video calling.
Connectivity
Samsung Galaxy S3 has all the latest connectivity options among smartphones. The phone runs on quad band 3G and quad band 2G networks as well as 4G LTE 700 network (North America, Korea, Japan). The phone can connect to the internet using EDGE/GPRS and Wi-Fi 802.11 a/b/g/n, DLNA with Wi-Fi Direct. The phone can also be used as Wi-Fi hotpot. The phone has Bluetooth 4.0 and micro-USB v 2.0(MHL). The phone features S-Beam which lets you use your NFC chip to transfer documents, images etc between friends. The phone has a TV out port to connect to the TV as well.
Battery and Storage
The phone has a standard 2100 mAH Li-Ion battery offering whopping talk time. The phone comes with 16GB,32GB or 64GB of internal memory which can be further expanded up to 32GB using micro-SD card.
Posted by iamsumit at 01:38