Apple has announced its new third-generation iPad, which comes packing a new high-resolution Retina display. “Until you see it you can’t understand how amazing it is”, said CEO Tim Cook. 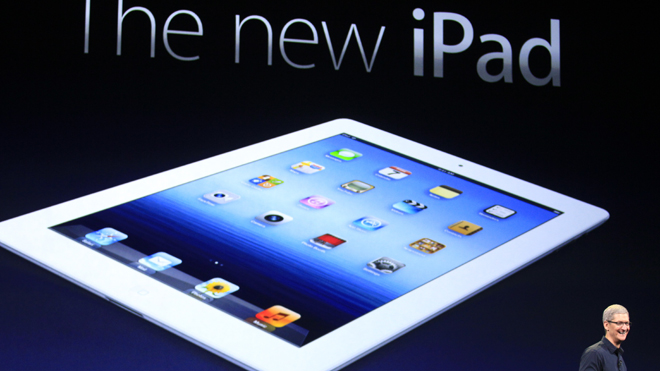 The new iPad is an oxymoron: It is at once a strong leap forward that will let Apple hold onto its huge market and mindshare, and yet the new features are not so different from the iPad 2 as to cause an I-need-the- new-iPad-to-change-my-life panic for current owners.

The new high-resolution display runs at 2048×1536 at a pixel density of 264PPI. That’s 3.1M total pixels. The new display is powered by an A5X processor with improved quad-core graphics capabilities. The processor itself is dual-core.The new iPad maintains the current 10 hour battery life with 9 hours on 4G. It’s 9.4mm thick and weighs 1.4 pounds.There is also a brand new feature in the iPad, an iSight camera on the front and a new rear camera that runs at 5MP, with a backside illuminated sensor, 5 element lens and a hybrid IR filter. It looks to be the same camera equipment shipped in the iPhone 4S, aside from the slightly lower resolution sensor. This allows the new iPad to record HD movies at 1080P .

The device ships with iOS 5.1, the latest version of Apple’s software. It will be available for all users of iOS devices and comes with new Siri support for Japanese users, which will roll out over the next few weeks.Apple’s voice dictation feature is also coming to the new iPad as well. This is not the Siri assistant feature, but it will allow for live transcription of your voice.

The new iPad also has quad-core LTE 4G capabilities, allowing for much faster network access and download speeds. The new chip is dual-mode and includes 3G HSPA+ for up to 21Mbps, and dual-carrier HSDPA for up to 42Mbps.In a very nice new addition, the new iPad will also act as a 4G hotspot, something that the current iPad does not do.

A host of Apple apps were updated to work with its Retina display, including iWork, iMove and Garage Band. Each of these apps will have a free update available for existing users.

Apple also introduced the brand new iPhoto for iPad, a basic photo editing, photo-beaming from device to device and a new Photo Journals (collages)feature. The new version of iPhoto offers a host of gesture-focused photo editing options including utomatic horizon straightening as well as more detailed information about the images you’ve imported from other cameras. Images up to 19 megapixels in size are supported.

Apple also announced an upgrade to its ‘iTunes in the Cloud’ product, which now supports seamlessly streaming purchased movies to all iOS devices. These movies will be available in 1080P, which is a nice boost.
The new version of the Apple TV also supports 1080P and comes with a newly designed interface that is heavily reminiscent of iOS. It will still run $99 and will be available beginning next week.

Apple’s Tim Cook said about the company’s role in a ‘post-PC’ world “We’re talking about a world where the PC is no longer the center of your digital world,” he said, “but is just another device. The devices you use the most are more portable, more personal, and dramatically easier to use than any PC has ever been.The iPad is reinventing personal computing.”
Last year alone, Apple sold some 172 million of these post-PC devices, including the iPad, iPhone and iPod. 62M of them in the final quarter alone. If you count the iPad as a PC, it outsold every other major manufacturer last quarter with 15.4M units in sales.

In india it will be available in coming few months.