Holi (होली), is a religious spring festival celebrated by Hindus. Holi is also known as festival of Colours.

The festival of colours 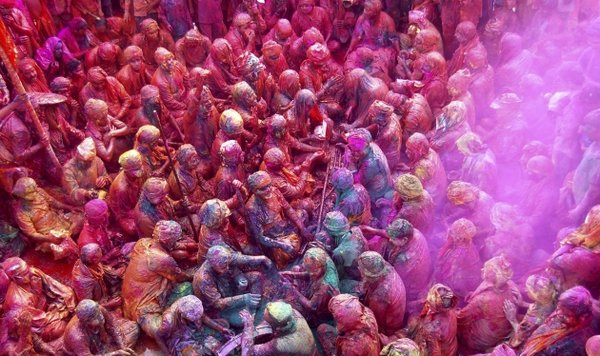 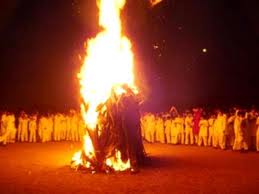 Holi is the Hindu festival that welcomes the Spring and celebrates the new life and energy of the season. Although Holi has religious roots, not much religious activity is involved in its celebration.
A child enjoys Holi ©

Holi is the most energetic Indian festival, filled with fun and good humour; even the strict rules of separation between castes are abandoned.


Holi is also called 'The Festival of Colours', and people celebrate the festival by smearing each other with paint, and throwing coloured powder and dye around in an atmosphere of great good humour.


Holi is seen by some as the Hindu festival that is nearest in spirit to St. Valentine's Day.


During the evening of the full moon, bonfires are lit in the streets.


These bonfires not only purify the air of evil spirits, but mark the story of Holika and Prahalad.


The next day, people of all ages go into the streets for jollifications and paint-throwing.


You can get the feel of the modern festival by reading this report on Holi in Chandigarh:

The main day, Holi, also known as Dhuli in Sanskrit, also Dhulheti, Dhulandi or Dhulendi, is celebrated by people throwing scented powder and perfume at each other. Bonfires are lit on the eve of the festival, also known as Holika Dahan (burning of Holika) or Chhoti Holi (little Holi). After doing holika dahan prayers are said and praise is offered. The bonfires are lit in memory of the miraculous escape that young Prahlad accomplished when Demoness Holika, sister of Hiranyakashipu, carried him into the fire. Holika was burnt but Prahlad, a staunch devotee of god Vishnu, escaped without any injuries due to his unshakable devotion.

Holi was originally a spring festival of fertility and harvest. Now it also marks some Hindu legends, which provide some of the ingredients for the celebrations.


Holi is an ancient festival which is referred to in the 7th century Sanskrit drama, Ratnaval.

Smearing colors on friends and dear ones is the basic idea of Holi, no one is spared. Both the young and the old enjoy throwing water balloons, dry colors, and washable dyes on anyone in sight on the day of the holi. We go around in streets, with a tin drums, armed with tonnes of colors and big syringes filled with colored water. And at the end of the day no one will even remotely resemble themselves. To join us in our celebration you can particapate in many ways by joining us through virtual holi.
Posted by iamsumit at 22:49